This was a hard fought finish! I didn’t think I was going to make it. Considering I started the quilting on Monday and did nothing but rip everything I tried. The problem was, I didn’t have a clear idea of what to do with the quilting. I was stymied, befuddled and at a great loss. I wasn’t going to try, knowing that whatever I did would take time that I didn’t have. I was leaving on Wednesday for Florida, 3 days earlier than planned. Oh, the hardship that was! OK, so not a hardship, but still, it left me little time to do a major amount of quilting. So I just did what I always do, load up the top and start.

Which I did, and it came to me, swags on the border with piano keys below. So I did a few swags and realized, they were too wide, so my first rip of the day happened. I marked the swags and started again. I then went back and echoed the swags twice and added the piano keys.

Then it was time to address the interior. I knew I wanted to do curved cross-hatching in the side triangles, but what to do on the corner squares? I tried a curved cross-hatch and did it backwards. So, out came that quilting.

Then I decided to address the star points. I tried to follow the lines of my stripes, but they were not perfectly matched at the seams, so that was a fail. I quilted 2 lines going the opposite direction of the stripe, but even that wasn’t working. So I left those 2 lines to rip later and just decided to do a loose meander all over the interior, regardless of the star design. Man did that go fast!

Then all that was left was the binding. Which was another conundrum. What fabric to use? The red/cream stripe, a different red/cream stripe, or the blue of the border? The blue border scraps won even though and I had to piece them to get enough, and single fold was all I could make. But it’s alright, because it’s done! And in more than enough time for me to jump in the car on Wednesday and head south. 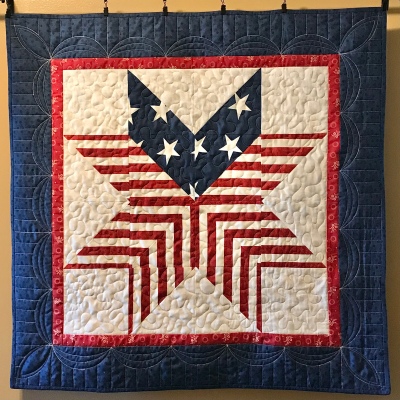 So here is my completed Oh, My Stars! Not the way I planned to finish it, but finished is better than perfect!

Now it’s your turn to link up your finishes!!! Join the link-up party below and share your projects.

You are invited to the Inlinkz link party!

https://fresh.inlinkz.com/js/widget/load.js?id=a8b40ada7693d64e5923I am also linking up with Favorite Finish at Meadow Mist Designs.

A knitter, sewist, quilter, mom, wife, doodle lover, and now a G (grandma)!, but not necessarily in that order. Just ask my family, they'll tell you who comes first. Psst, it used to be the doodles, now it's Squish!!! View all posts by chrisknits

Cat got your tongue? Cancel reply

This site uses Akismet to reduce spam. Learn how your comment data is processed.

√ Done / In Progress X Not Done